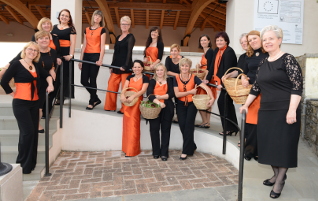 At the end of November 2017, the Vocal group Vinika attended the Primorska region regional competition of adult singing groups at the Music School in Postojna organized by JSKD. The jury awarded the group gold. After winning in the women’s choirs category at the Azzano Decimo International Competition in 2008, after two consecutive first places in regional competitions at the Sozvočenja competition, and at the second competition in 2012 they became absolute Slovenian winners, this gold prize was for the group one of the biggest successes in the career .

Listen up to the awarded compositions.

Women’s choir Vinika from the wine region Goriška Brda in the west part of Slovenia. The choir’s repertoire includes works from all musical periods, but we are especially thankful to young and already acknowledged Slovene composers to create new pieces on our request. Thanks to Patrick Quaggiato, we enjoy to sing his Ladjice želja, Ciganska balada, Moj ljubi potuje s klavirjem…the list is long. And thanks to Radovan Kokošar for composing Mati Jagoda. His instrumental accompaniment on the accordeon for the competition Sozvočenja 2007: Ptička Briegarca is fabolous!  First performances of his works are an important stone in the mosaic of Slovene choral music. We also participate in vocal-instrumental projects which are very well received.

ABOUT WHAT WE SING?

We sing about Goriška Brda, about cherries, about wine. A well known Slovene songwriter Iztok Mlakar dedicated  an ironic song to Brika( a woman that lives in Goriška Brda) and its all true. That’s me. I bite. I scream. I enjoy life! Sure, I’m very loud. I still have no idea what ppp (pianissimo) means. My conductor, Ms Franka Žgavec, president of the cultural center for the Slovene minority in Italy Kulturni center Lojze Bratuž, an excellent teacher of singing with an immense amount of patience and perseverance, at the end of her efforts explodes in laughing, because it’s impossible to make a Brika sing quietly.

But Franka Žgavec knows what she is doing and even if for us, the singers, the choir rehearsals are just fun, we receive many compliments and excellent reviews from music critics.

We successfully participated to the choral singing competition SOZVOČENJA 2007. Please listen to the 4 songs in Slovene language that tell the story of working, living, loving in Goriška Brda: PTIČKA BREGARCA. It’s about growing cherry trees, collecting them, about travelling to big towns to sell them. Radovan Kokošar on the accordeon.

The female vocal group Vokalna skupina Vinika and Franka Žgavec participated to the competition SOZVOČENJA also in 2010. The vocal – instrumental project Grenko morje (Bitter Sea) got the award as the best project for the region of Primorska. So we presented Grenko morje also in Ljubljana and it was well received. The Bitter Sea is a story told in songs and in letters. About women from the region Goriška, Slovenia, who left their families and little babies to go to work in Egipt. Second half of 19th century, when the Suez canal was finished and a the number of european businessmen decided to move over there. The fear of leaving home, homesickness, the search for happiness and the battle to send home some money to survive.

Article in Slovene about the Bitter Sea

Who were this women?

For the choral singing competition SOZVOČENJA 2012 we played the roles of gipsies. The fire, the sparkling, the energy, the passion, playfullness of gipsy music took our hearts. Also world known composers J. Brahms, G. Bizet, A. Dvořak in R. Schumann were amazed by this rithms.

We  mostly sing in Slovenia and the north part of Italy. We love to prepare concerts with other choirs. Our ambition is to take choral singing and the story of our land, Goriška Brda, also to other people.

Please listen to the few songs that we published on YouTube (find them under page “Posnetki”), visit our face-book page for the recent news about the vocal group and write to us if you are interested in a common concert or other project (vinika.brda@gmail.com).

You can read the article about our concert when we celebrated the 20th anniversary on the web magazine Naši zbori.